Santiago de Compostela - the most popular pilgrim route of Europe

Have you ever heard about the pilgrim routes leading to Camino de Santiago – a remarkable medieval town located in the north-east of Spain. Undoubtedly, you have. It is nothing strange as the Camino de Santiago route is one of the most popular pilgrim routes in Europe. What's more, it has been popular through centuries since the medieval times. However, this practice died as a result of unstable political and religious situations. Not until the 20th century was the St. James route asleep. The route experienced its rennaisance thanks to the pope, John Paul II, who exhorted the faithful to spiritual rebirth around the idea of Camino de Santiago, in 1982. The number of pilgrims started to grow.
Today, pilgrims can choose between many routes which stretches eg. in Spain, Portugal, France. New marked routes are created in other countries. One of the most popular routes starts at the foot of the Pyrenees, in France. It is the French Way which stretches on about 800 km and leads through the beautiful Spanish regions of Navarra, La Rioja, Burgos, Palencia, Castilla y Leon, Lugo and A Coruna. Pilgrims can diverge from the route and visit the impressive old towns of Pamplona, Burgos, Leon and more. The more challenging route is the Northern Way leading through mountainous areas of the north part of Spain and following the coastline. This route provide fantastic views over the sea, fishing villages. Pilgrims can start their journey from San Sebastián and continue their pilgrimage through Gijón, Ribadeo and, alternatively, Oviedo.
Camino can be covered on foot, by bicycle or even on horseback. This route is choosen by those people who look for their life sense, faith, the God; who need to rest in solitude; or who want to explore Spain in unique way and see its authentic beauty. This route is for individual pilgrimage. Pilgrims can sleep in so-called albergue which are located along each route. This kind of experience is a fantastic possibility for taking a journey into our souls. The aim of this pilgrimage is Santiago de Compostela and the breath-taking Cathedral which is the burial place of Saint James the Great - the apostles of Jesus Christ. 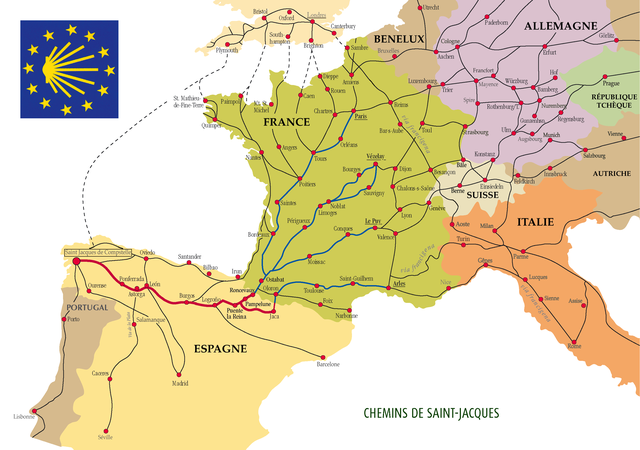